How Qatar’s vision of a sustainable 2022 FIFA World Cup has led to groundbreaking architectural projects.

Mohammed Al Mulla is the project manager for Ras Abu Aboud stadium. He is responsible for delivering one of the key 2022 FIFA World Cup venues, currently one of eight being built in Doha.

The 40,000-seat stadium is based on a unique modular design, using recycled shipping containers, and is set to be entirely dismantled and repurposed when the 2022 World Cup concludes.

It is a visionary sustainable design that looks set to be emulated by architects and designers around the world. The logistics involved are breath-taking, and the pressure to deliver intense.

Ask Al Mulla to describe to a small child what he is doing, however, and his eyes light up. His hands begin to sort through an imaginary pile of multi-coloured bricks.

‘The stadium will be built using the same concept as the toy every child has – Lego,’ he says. ‘In simple words, the main structure will be built of steel, and as we go up from floor to floor, we are going to insert the containers across the sides of the stadium, which reminds us of how children play with Lego.

‘We can put it together easily, and at the end of the day we can take it apart, just as a child packs up his Lego, ready for further play.’

Simple, then – yet visionary. He explains: ‘We were thinking through what the eighth stadium could look like, and came up with this unique concept of a sustainable stadium. We asked: ‘What is going to benefit the people of Qatar – now, but also in the future?’

‘What do they need? What do others around the world need? We want to leave a legacy, but we don’t necessarily need eight stadiums here in Doha all the time – this one can be packed up and reassembled elsewhere, even internationally. I think people will really appreciate what we have done, and the concept behind it.’

Al Mulla is passionate about the unique nature of the Ras Abu Aboud stadium. ‘It is different from other stadiums being built in a traditional way,’ he says. ‘First of all, it can be carefully dismantled and used elsewhere in different forms – anywhere in the world. It is flexible, so can be reused as smaller stadiums.

‘Also, because it is being made from reusable material, it has a shorter build time, it has a lower cost, we are using less construction material, and there is less waste on site, with lower carbon emissions. It is win-win.’

He adds: ‘The VIP boxes, control rooms, operational rooms will all be made from shipping containers, allowing for flexible reuse of these components. The steel framework can be dismantled and used elsewhere after the World Cup. It is sustainability in action.’

The concept was dreamt up by Fenwick Iribarren Architects and each section of the stadium is separate. The Supreme Committee for Delivery and Legacy now see this as one of the jewels in the World Cup crown. Even the lavatories and concession stands can be taken out and reused.

The reuse of shipping containers is a nod to the seafaring trade conducted over centuries on the waters of the nearby Gulf, and give the stadium a functional forwardlooking edge.

Reusable seats will complete the 450,000 square-metre venue, enviably located on the shores of the sparkling Gulf. It is also highly accessible for the many overseas visitors expected in Qatar, being 1.5 km from Hamad International Airport in a previously mainly industrial area of the city.

After the World Cup, the site will be repurposed as a glamorous waterfront development for local residents. Again, the low-impact nature of the construction will come into play, leaving little environmental footprint. 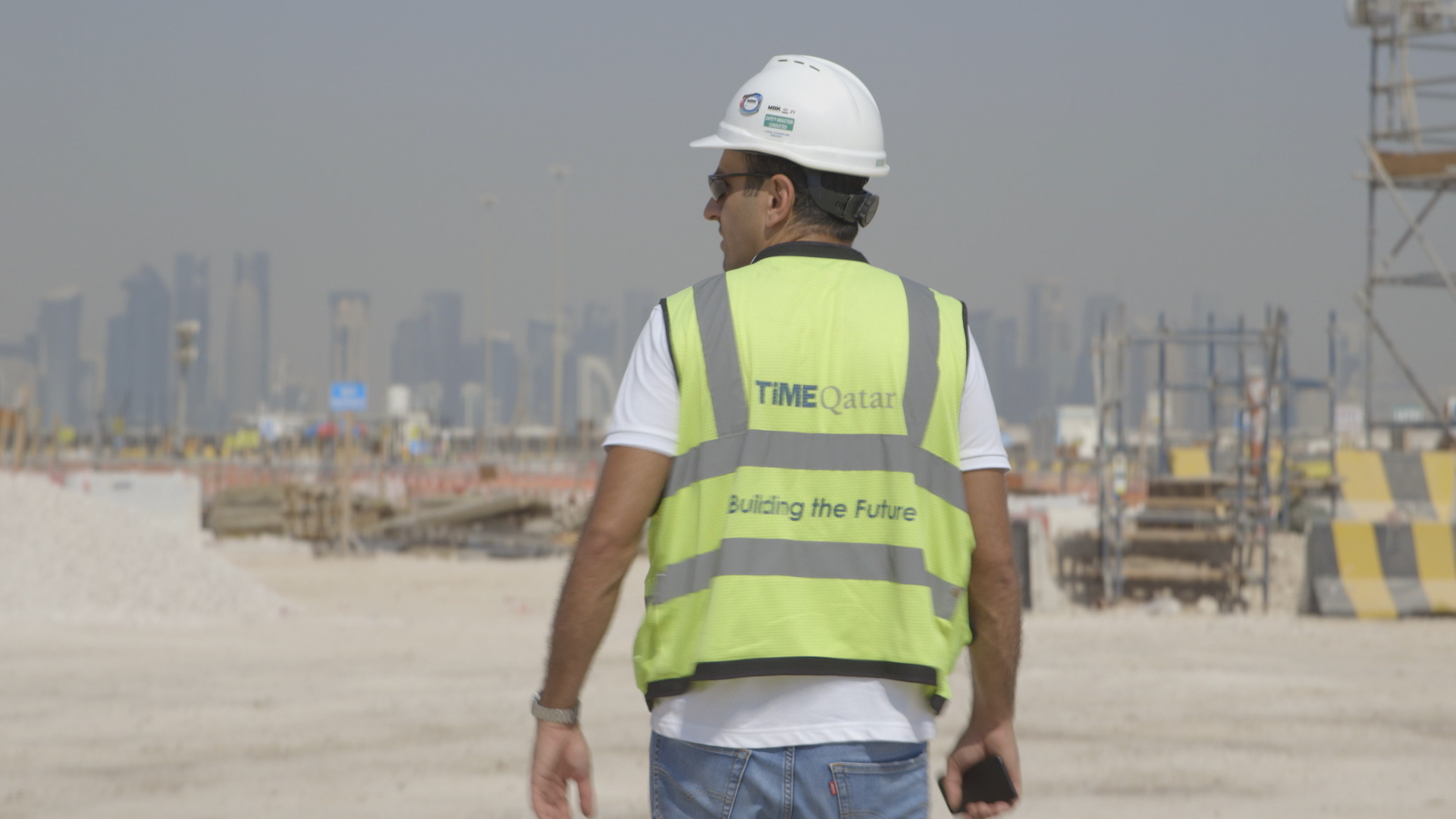 Al Mulla speaks from the site where the dream is taking shape. With the distinctive skyscrapers of Doha in the background, cranes and diggers work ceaselessly to make his vision a reality. Because much of the design is prebuilt, it will spring upwards in double-quick time. As he surveys the works, Al Mulla is aware that he is delivering a blueprint for others to follow in the future.

‘We are pushing the boundaries of design,’ he says. ‘Using large scale recycled material for a reusable modular structure is a huge architectural advance. It is very exciting.’

The stadium will host World Cup matches up to the quarter final. Al Mulla says: ‘The moment I’m really waiting for is when the first match is played here, seeing all the people from Qatar and abroad coming towards the stadium.’

‘Then when it is dismantled, being used elsewhere, it will remind me of all the great team work, and will bring back all the good memories.’

He says: ‘It is an honour to work on a visionary project like this. It is the first of a kind. It is legacy-driven thinking, and it will set a basis for coming generations on how to optimise and come up with sustainable solutions, not only for sporting venues, but also on other construction projects, great and small. It will influence the way humans build in the future. That is a source of great pride.’